The City of Ankara

The Ankara region’s past reaches all the way back to prehistoric times. While there are several versions as to the origin of the name Ankara, it seems as though its historically recorded name has hardly changed ever since antiquity until our time: Ankyra (Ancyra), Angora, Enggürü and now Ankara.

After having remained within the borders of successively the Hittites, Phrygians, Kimmerians, Persians, Lydians, Macedonians, Galatians, Romans and Seljuks, the town was included in the Ottoman realm in 1354, by the son of Orhan Gazi [Gazi=Veteran Fighter of the Faith, Orhan Gazi was the Ottoman sovereign, † 1362], Süleyman Pasha [Pasha=Commander]. In 1902, the Province of Ankara included 5 sanjaks and 21 kazas [sanjak and kaza are subdivisions of an Ottoman province], but in 1924 the sanjaks were abolished according to the Bill on the Principles of Organization and thus the sanjaks of Kayseri, Yozgat, Kirsehir, and Çorum were elevated to province status and thus separated from the Province of Ankara.

Ankara, where the planning for the Liberation War and preparations for the founding of the Republic took place, holds a special significance in our recent history. After he had chosen Ankara as headquarters to conduct the proceedings of the Representative Body, Mustafa Kemal was greeted with much enthusiasm upon arriving here on Dec. 27th, 1919. It was here that, from that day on, Mustafa Kemal started to form the foundations of the Turkish Republic. The town of Ankara, declared Capital on Oct. 13th, 1923, was from then on the scene of a rapid social, economical, political, military and cultural development.

Ankara, which has been the cradle of the Anatolian Civilizations for ages, has been in a rapid social development and renewal especially in the aspect of cultural activities, after becoming the Capital City. In our province, which has been the resort of many civilizations from the Ancient Anatolian culture up to day, we see the deep effects of the developments in the traditions, conventions and culture more clearly in the rural areas.

The trend, which started with imitating the old Ottoman architecture especially in the Dikmen, Çankaya and Gazi Osman Paşa quarters of the province, transformed into modern architecture and pioneered the form and style of today’s contemporary Turkish architecture. Besides, the old mansions and houses in the Ankara Castle today still live almost without any changes.

In Ankara, there are about 30 official and private museums, 1 National Library with its renewed facilities, 43 public, 1 mobile and 1 children’s library. Moreover, many official and private organizations that address to national and international congress tourism keep alive the cultural activities. In our province, there are 343 associations and foundations performing cultural and art activities. There are 418 printing houses, 32 cinemas, 8 state theaters and 21 private theaters in our province.

The Museum of the Republic and The Liberation War Museum

The Education Museum, TCDD Museum and Art Gallery, TCDD Open-air Locomotive Museum, PTT Museum, 100th Year Sports History Museum, The TRT Museum and Kırıkkale Silahsan Museum are private museums that carry out activities under the supervision of the Museum of the Republic and The Liberation War Museum. 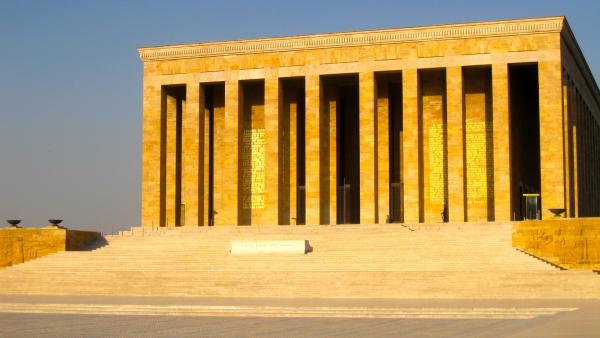 METRO II. Stage Rail System: Kızılay-west corridor has been planned to have a capacity of 744.000 passenger/day (48.657 passengers/hour-direction) with 18.3 km double line length, 174 vehicles (29 lines), 16 passenger stations in order to meet high passenger demand. It will be constructed on an important highway providing the west exit of the city. The Project and documents have been completed and tender permission is being waited.

METRO III. Stage Rail System: The rail system route that has been planned as the continuity of the current Batıkent-Kızılay route of the Ankara metro is within the scope of the northwest corridor of the metropolis. It has also a capacity to provide the transportation to the Organized Industrial Area by passing through Eryaman, Fatih Quarter and Törekent Quarter from Batıkent Station to West.

The contract for the system that will have a capacity of about 218.000 passenger/day (18.611 passengers/hour-direction) with 11 passenger stations, 13,4 km double line length between Batıkent-Sincan has been awarded.

There are totally 1.855 single, folding and double deck buses (1.188 municipality buses and 667 private-public transportation buses) within the borders of Ankara Metropolitan, and the public transportation service is provided with a capacity of approximately 400.000 passenger/day in 273 lines (the longest line is 100 km).